Wico was not being unrespectful, he was feeling anxious

Wico, a young black Shetland stallion, didn’t hold back to kick out firmly with his hind legs when he was being fed. It was also very difficult to touch or stroke him, he usually  ran off quickly if someone tried to.

Tilde, who adopted Wico a few weeks earlier, therefore asked her horse-riding instructor to come over so she could learn how to best deal with this behavior , hoping Wilco would  become easier to handle.

A few days later, the riding instructor came by and worked with Wico. According to this lady, Wico was very disrespectful. Tilde was advised to send the pony away when he dared to kick out, by assertively throwing a rope against his hind quarters.

And if he was difficult to catch, Tilde had to lure him with food.

It seemed like a good solution at first, Wico quickly got out of the way when chased off with a rope and after a few times he was neatly waiting for his food at a distance.

However, after a few days, it became clear that Wico, who before wasn’t keen to come, was now even less inclined to make contact. Let alone be touched and stroked.

This had now become completely impossible. Not even with food. 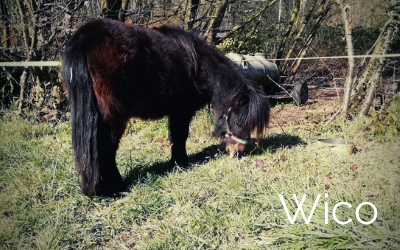 When I came to Wico a few weeks later I saw something different from what the riding instructor had seen.

I saw a super sensitive pony. An anxious pony. A pony with a lack of trust.

The kicking out was not a disrespectful behavior.  It was not an expression of dominance.

It was an expression of fear.

The worst thing you can do when a horse is afraid, is to chase him away. That only reinforces the fear. Instead, you should avoid a lot of action and pressure.

So instead of sending Wico away when he kicked out, I backed away myself. I was very passive and even a little submissive. With that I gave him the message: “Yes, I see that you are afraid and I take into account your sensitivity. If you say that I cannot get closer, I will not do that. I will do what you ask me, I promise!”

I continued working with Wico with this attitude. Soon he began to notice that I was taking into account how he felt, that his fear was being seen.

Little by little, he opened up more. A subtle conversation arose.

At the end of the session, which lasted less than half an hour, I was able to stroke him and he was standing relaxed beside me.

A few days later I received the following message from Tilde, who applied the tips I had given her:

“Oh wow Karine! I can stroke him! I didn’t bring food with me and I could stroke him on his head and on his neck and under his chin without him leaving! And this the first time I went to see him after you were here! It made me emotional … That I can finally just stroke him! “

Isn’t that great? How you can achieve much more by really listening to a horse and communicating in the right way, instead of only wanting to control a horse?

Correct and sensitive communication is crucial. Many problems with horses arise or worsen due to miscommunication.

Communication is therefore also the first building block of a true connection with your horse.

In total there are 7. If you have all these 7 building blocks in place, you can be sure that the relationship and training of your horse will improve by leaps and bounds!

Curious about those 7 building blocks?

Then register for the live online training “The 7 building blocks for an amazing relationship with your horse”.

In this training I will share those 7 building blocks and at the end of the session there’s also a live Q&A session.  You can ask me all your questions in the live chat.

Beginning Friday 3rd until Thursday the 9th of April you can pick from 5 different times and dates. We’ve made sure that wherever you live on the planet, there’s a time that should suit you.

Just go to the page below to find out the available sessions and register for the one of your choice.

Important: When registering, first “convert to your time zone” and next select your time and date. That way there’s no confusion about the exact time the webinar starts where your live.