Is your horse Shutting himself off?

Some horses have difficulties opening themselves up to their owner. They don’t feel safe enough. Or they feel uncertain. Sometimes they have fear, fear of humans or fear of what is to come.

Some horses even shut down completely. They completely shut off from the outside world when they are in the company of people.

It sometimes happens that a horse walls himself off after an important horse friend died and he feels a big loss. Or when a mare loses her foal. Often this is only temporary.

I’ve also seen it with horses that have physical problems. They have pain or deficiencies (minerals/vitamins) that prevent them from having the energy to deal with others in an open way, so they become very passive and introverted. As soon as their physical problems are solved, they can open up again and show more interest.

However, what also occurs is that a horse shuts himself down after experiencing a traumatic event with humans or after he has been repeatedly trained in the wrong way. Think about training sessions where too much pressure and force is used . These horses can close themselves off because they feel less vulnerable this way.

That can go on for a very long time, sometimes years, or for a lifetime. Even if the trauma has been a long time ago. Even if there’s another owner or trainer by now.

Shutting yourself off is a self-protection mechanism

The horse still participates, but doesn’t feel much anymore. Shows no more emotions. Gives no opinion. The horse thus protects itself, it protects itself against unpleasant, hurting or traumatic experiences.

Horsefulness Liberty Training and it’s 8 connection exercises arose from my work and experience with, among others, shut-down horses. Horses that completely closed themselves off. Horses that no longer allowed real contact with people.

That’s how I remember Blister. A somewhat skinny older gelding of about 20 years old. He closed himself off for years while dealing with people and it was extremely difficult to get heads or tails of him. It seemed like he was emotionless. His ears hung a little, as if he was napping. His eyes were a bit cloudy and often half closed.

After I had worked with him in liberty for about three weeks, I saw a small change one day. It was as if his eyes were a little more open, brighter too. Shortly thereafter he came to me for the first time and sniffed at my boots.

I remember that I did my best not to disturb this moment, to stay in the moment, to not think and analyze. Because I knew, if I were to do that too much, there was a chance that he would close himself off again and break the connection.

After this first real contact it went better and better. Every time I was with him I could see that he was opening himself up more and more and that his withdrawness was slowly coming off. After I had completed all the connection exercises with Blister, he had become much more open, more curious, more interested. He thought the Boomerang (connection exercise 8) was fantastic.

You can also help your horse to become more open.

I’m not saying that it will happen in 1, 2, 3. Certainly not if your horse really has  completely closed himself off. Then it may take some time to assure your horse that it’s ok to open up, that it’s safe.

But that doesn’t matter, it’s not about how quickly you see change, but thát you see change. And that you take the right steps, so that your horse becomes increasingly aware that it is safe to open up. That he has the desire to make contact, to be more vulnerable, to show himself as he really is.

Would you like me to help you with that?  That’s possible with the online Horsefulness Liberty Training Program. 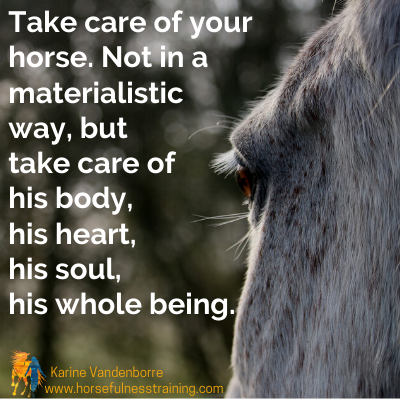