Fella was a 12-year old mare, that was tensed and angry during lunging. No bend, short strides, ears flat, swishing tail, nasty looks.

The previous weeks her owner focussed mainly on liberty training, to build a connection with her, and now it was time to start working on the lunging.

The first time I saw her on the lunge, I remember thinking: “We will have to do A LOT of work in hand and lunging to be able to solve this… “

But before we did that, I decided to start with Mindful Moving. Why? Because I found out from working with so-called “difficult mares”, that they often lack body and movement awareness.

So we took Fella into the arena, and I showed what I call “the Sensitive Touch Technique”. Fella was not happy with that at first: she flattened her ears and was very tensed. But after a few minutes of using sensitive touch while walking, she started to change…

Suddenly a big sigh came out, after which she dropped her head and started softening her body. Her ears relaxed, she started bending and stepping under her body with her inside hind leg.

After a minute or so I stopped and stepped away from her, giving her time to process what just happened. She turned her head towards her belly and stood like that for a few seconds before she came to me and put her nose against my arm.

Then we did the same on the circle to the right. The same happened: after a while, the mare gave a big sigh, dropped her head, softened her body, and started to bend beautifully.

Fella’s owner was surprised: “I never saw her walking so relaxed on a circle… And she’s not angry… She even looks happy…”

The owner worked with her like this, with sensitive touches for the next week. After that, I taught her how to use body wraps. She also used poles and specific mindful groundwork exercises to help Fella increase her body and movement awareness.

Listen to what Fella’s owner said after one month of Mindful Moving with her horse:

“Fella was such a difficult mare to work with. Especially during lunging and work in hand, she would be frustrated. She was tensed and couldn’t relax. So was also angry at us. She would sometimes try to bite us.

Then we started sensitive touches and other mindful moving exercises and from the very first lesson, we saw a big shift in her behaviour. Fella became a different horse!

She started to relax and she connected with us during training, which she never did before. And after a few weeks of practice, the lunging was so much better. No nasty looks anymore, and beautiful strides! What a difference!

Thanks to the Mindful Moving lessons we realized that she lacked body awareness. This is now much much better. And we even didn’t do a lot of work in hand or lunging to teach her how to bend and use her hind legs better.

What helped her the most with that were the sensitive touches. It’s unbelievable, but we have a different horse! It’s fun now to train her!”

Isn’t it amazing how expanding your horse’s body and movement awareness can have such a profound impact on your horse’s
well-being and the relationship with your horse?

If you also want this for your horse then join my upcoming Connection Circle about Mindful Moving.

This online workshop will be held on Sunday, June 20th.

It’s a 4hrs online event, and we’re starting at 5 pm Brussels time (morning/noon for the USA). You’ll be able to convert to your time zone on the registration page, so you’re sure not to miss it.

Here below is the page where you can find out more about this event and where you can also register to join:
https://programs.horsefulnesstraining.com/karines-connection-circle-mindful-moving-horses/ 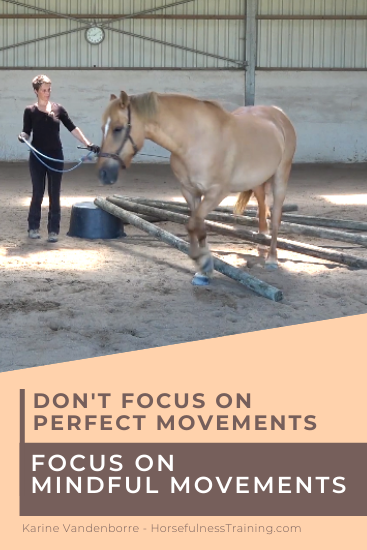